My Crystal Grid and the way it functions 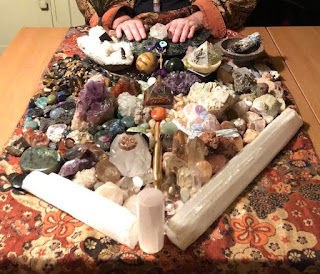 If you need healing, peace and reduced anxiety, or just to recalibrate your senses to get back on track with your life, this grid can be a tremendous aid.
The two long white stones framing the tip of the funnel of the grid are selenite, as well as the small stopper between them.
You would sit at the tip of the funnel with feet flat, remove the selenite stopper, take deep breaths, close your eyes, and focus on the healing you need.
I would sit at the wide end putting Reiki into the large Serpentine stone, activating the grid to move the vibratory frequencies of all the various crystals through a long copper staff connecting them in the center of the grid along with several Wilhelm Reich Orgonite devices (two resin pyramids and a small round tab).
(Note: to the right of my hand you see a pyramid sitting on a quartz bowl, and under that bowl is a little box, and in that box is healing dirt I smuggled in my shoes from the grotto of legendary artist and mystic Emma Kunz: https://www.emma-kunz.com/en/grotto-and-reservation/

Each time I assemble the grid it works the crystals in different ways.
This newest assemblage feels set for healing with the Danburite setting right at the tip to make your own light SHINE!!

It is an honor to be steward to these bones of the Earth for my visit to the planet.
When I leave (not for more than 40 more years as several psychics have told me in the past year that I will live into my 90s) I will be sure that the grid is handed over to someone who will take care of it and use it to help transform and heal inside whatever future lies ahead.

This is the tiny 36-second video of the grid on Winter Solstice: http://bit.ly/2ButD88
To making 2018 a year of transformation.
To fully confronting fascism in 2018.
For the very tough battle and the healing we will need during and after.
With Love, Poet CAConrad

PS Emma Kunz came to Philadelphia over a century ago from Zurich in search of a young man who fell in love with her. She was unable to locate him again and returned to Zurich where she soon developed her skills as an artist and healer.  It feels particularly nice to have this grid in Philadelphia once again but with the newly added small bit of her healing dirt. 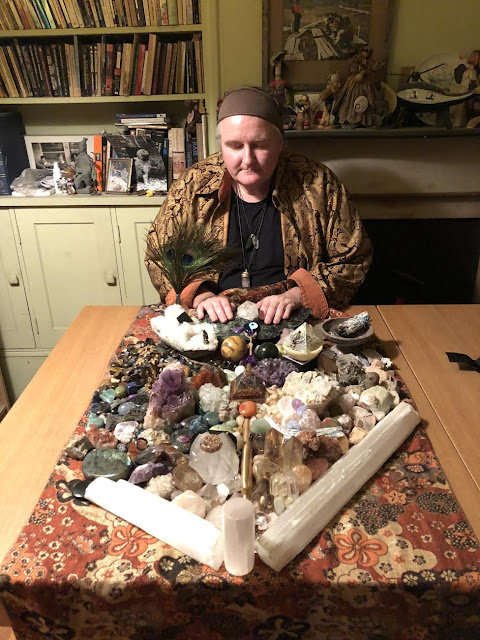 Posted by poet CAConrad at 7:30 AM