Juliana Spahr and Stephanie Young invited me to create (Soma)tic #43 for their piece A MEGAPHONE, forthcoming in CHAIN Magazine. Many thanks to Juliana and Stephanie.

"If you are very frank with yourself and don't mind how ridiculous anything that comes to you may seem, you will have a chance of capturing the symbol of your direct reaction. The antique way to live and express life was to say it according to the rules. But the modern flings herself at life and lets herself feel what she does feel, then upon the very tick of the second she snatches the images of life that fly through the brain." --Mina Loy in a 1917 interview

Gather twelve of your favorite books of poetry by living women poets. Divide your copy of Maria Raha's 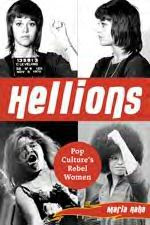 HELLIONS into twelve parts ("Uneasy Riders" is the name of chapter 7). HELLIONS is the perfect book to accompany this exercise. Talk to twelve women about visiting them. Tell them you will bring a box, and ask them to place a small object inside the box, something you're not to know about. It can be anything: a stone, button, shot glass, comb, lipstick, dildo, chalk, etc., but ask them to not tell you what it is. Ask them to sleep with it under their pillow the night before you visit. I told Maria Raha about this (Soma)tic exercise and asked her if twelve was too many, and she said, "If you don't know twelve women you need to SELF EXAMINE!" This is why it's good to ask Maria Raha. Twelve women it is! Take notes through the process of choosing the books of poetry, and visiting the twelve women to gather the objects. Write write write notes notes notes. After you have gathered the books by living women poets, and the box of twelve objects, set aside twelve consecutive days. 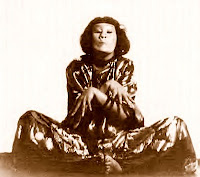 DAY ONE: As a preliminary, read the Loy quote aloud, then immediately watch Mary Wigman's 1914 dance HEXENTANZ on You Tube, and watch Wigman with the volume as LOUD as possible. Then read the first of the twelve sections you've created in HELLIONS. Climb into the bathtub, turn on the shower, open an umbrella, and lie down to read the first book of poems, pausing from time to time to YELL the poet's name! Take notes take notes. Reach inside your box and choose an object, but don't look at it. Smell it, rub it against you. Meditate with the object in the middle of your chest while thinking of the twelve women, water beating against the umbrella. SCREAM YOUR NAME with eyes closed in meditation. SCREAM YOUR NAME with eyes open. Harryette Mullen says, "proceed with abandon / finding yourself where you are". Look at the object. Do not put it back in the box, but do take more notes.

Choose a different location for each of the next eleven days. Stand in mud, hunch in the back seat of a car, in the basement with a candle, sit in a graveyard, on the steps of a courthouse, or stand facing the statue of a very dead old man. But be 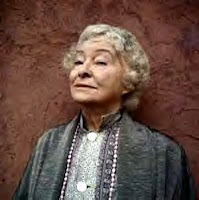 somewhere completely different each day. Before reading from HELLIONS, and the next book of poetry, and fondling an object in your box, read the Loy quote aloud, and watch Wigman's HEXENTANZ dance. Let these brilliant grandmothers loosen any knots, and always remember as Laura Riding says, "the words are only part of the poetic formula: the rest is ritual, and the reason in them must contend with the mechanics of magic-making in it – and must not win." Your notes might seem an endless chore of notes once you've completed your twelve days, but carry them around with you, and take more notes while reading them, putting them into a frame. The poem will come to you from those notes, it's in there, no doubt about it. You've infused the (Soma)tic with these others, and now your new poem is waiting.
Posted by poet CAConrad at 12:41 AM

for Ryan Trecartin and Lizzie Fitch

(Soma)tic #42 was written by CAConrad & Debrah Morkun.
There were three Trecartin films in Philadelphia in May of 2010 at The ICA, VOX Populi, and The Fabric Workshop Museum.

2 DAYS viewing Trecartin's films. DAY ONE: Before leaving home read from Franz Kafka's short story collection, if you don't own a copy, STOP, go buy one. Find a

favorite sentence, like this one from Kafka's In the Penal Colony, "The Condemned Man especially seemed to be struck by a premonition of some sort of significant transformation." Cut this favorite sentence out, then cut this favorite sentence in half for later. Shred the rest of the book, pausing to TAKE NOTES about the love it takes to chop a book to pieces. Pages torn, sliced, then stuffed in your underwear, socks, bra (if you're a "man" get one, or find something to hold shreds of Kafka around your nipples). Wear something LOOSE so ONLY YOU know you are wearing Kafka, and let bits of the paper fall to the sidewalk as you walk to the gallery. And DO WALK to the gallery, working up a sweat with Kafka stuffed in your arm pits. At the gallery go into the restroom and suck on one half of your favorite sentence you cut earlier, then wrap it around a jelly bean or other candy YOU LOVE, making a Kafka candy decoupage. Do the same with the other half. NOW DRINK A FIVE HOUR ENERGY DRINK, then shove one of the Kafka candies up your ass, the Kafka candy decoupage now magically transformed into the Kafka candy decoupage suppository. Pop the other candy in your mouth. You now have your favorite Kafka sentence in you mouth, and up your ass. Sit down and watch the Trecartin film. TAKE NOTES TAKES NOTES. Grind 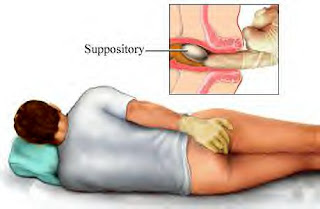 slowly in your seat, HOW DOES IT FEEL to have Kafka up inside your asshole while watching the Trecartin film? How does THAT feel? How is it? TAKE NOTES. When the Kafka candy in your mouth is gone TAKE NOTES and then suck the end of a chocolate bar, then write instant commands on your arm with the chocolate, like, "ENGINES RIP A PURR," or, "CRYSTAL FREQUENCIES," or "MAGICIAN'S ELIXIR," or, "ASCENDED BLOOD," then lick it off, suck it off, eat if off your arm your words. TAKE NOTES. Where are you in the film? Where are you actually? TAKE NOTES. Chew strands of Kafka shreds, then shove the wet balls up your nose. Breathe through your mouth and TAKES NOTES inside the Trecartin film, the film, Trecartin, it's there THE POEM IN THE NOTES. DAY TWO: Of course, it all starts, then, with a vision of Huckleberry's pelvis. & you're under his blankets, but those blankets are really the Mississippi River. For a moment, too, they are the Delaware, & then the Schuykill. And you're swimming but floating. This is to visualize first thing in the morning on the day you set aside for the (Soma)tic. Breathe thru your nose, and out through your mouth, and picture Huckleberry and then a boy from the future, however you imagine him. Become him and become the eye thru which he sees. See Huckleberry and then the boy from the future and then yourself getting stuck in the Mississipedia... or web-internet river, for lack of a better term. Feel your body turn to cobblestone and then to rust and then to internet marginalia. Say your favorite god's name three times, and then light a candle. Go to the computer screen and dial up Youtube. First watch Nick Cave singing "Saint Huck" live. Then, watch a video of people voguing. Next, leave your home. Walk to a store where they sell balloons, and select a balloon that speaks to you. It must be one you can blow up yourself. Then, go to a Philadelphia tourist shop and buy a fake copy of the Declaration of Independence. Write the words "Jingo," "oil spill," and "hallucinogen" somewhere on it. Then, roll it up like a scroll and put it in your underwear. Next, as you walk or ride to the

museum, appreciate your body as a steamship. Feel steam emanating from all of your orbs. Buy some Wild Turkey whiskey on your way. Take a swig in a secret location of your choice somewhere near the museum, and spill an offering of it on the ground. Say, "to the cattle. to crazy horse." Go to the museum. Sit and watch the Trecartin film transfixed. Take notes that feel like ether. Take notes that feel like gut dust. scattalogical notes. remember there is the declaration of independence at your base. write about this. let your writing come from the steam of the body and from the base of the heart. take notes until you feel like you might disappear. Somewhere in the middle of all this writing, take a break to blow up the balloon. Notice your

breath and how blowing up this balloon relates to the film at hand. Write about this. Know that you are every person in the Trecartin film. When you are finished writing, prick your finger with a small blade of some kind, and mark the last page with your blood. Become blood brothers with the page. Dot the page with memory blood. NOW take your notes YOUR NOTES from both days of TRECARTIN ALLELUJIAH DEVIANCE and find the poem that poem, find, it, it is in there, the poem.
Posted by poet CAConrad at 12:18 AM