DREAMBOAT MAGAZINEHAS ARRIVED ! ! ! !I’m THRILLED to be published alongside POETS Marianne Morris, Amanda Nadelberg, Alan Bernheimer.MANY THANKS to brilliant Bay Area POET and PUBLISHER Alli Warren ! ! ! ! (I LOVE that DREAMBOAT is 9 letters with the most magical letter M as the centerpiece, M the 13th, M the hidden pentacle!!) 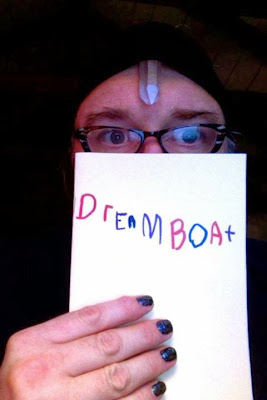 Posted by poet CAConrad at 8:55 PM 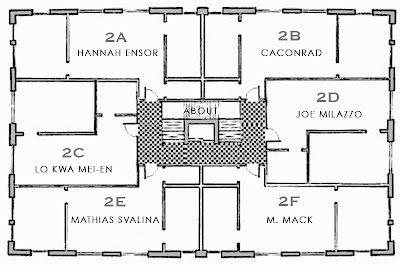 Posted by poet CAConrad at 9:25 PM 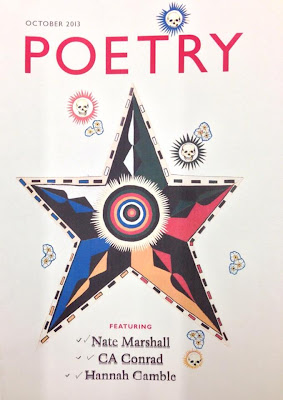 Will contain three poems from the (Soma)tic Poetry Ritual I did at the BANFF Art Centre in Alberta, Canada in April, 2013
Posted by poet CAConrad at 4:04 PM

#90: HEALING FOR A PEDOPHILE

I first thought about HEALING FOR A PEDOPHILE when I was in the middle of an earlier (Soma)tic poetry ritual, RESTORATION FIBER SONG.  With the RESTORATION piece I went back to where I grew up, fully immersed myself in my old environment, especially the most painful of memories, but NOT ONE word of memoir was to be written.  That was an exercise in resistance.

HEALING FOR A PEDOPHILE is a healing for a pedophile.  My stepfather is quite ill with lung and heart disease and may not last the year.  I spent much of my youth making certain he was never alone in the house with my younger sister.  I was given my first rifle when I was nine, and would sit in her bedroom at night with the loaded gun pointed at the locked door, my sister hiding in a closet.  John would be drunk outside the door moaning, “Show me your pussy, c’mon let me smell your pussy!”

A year ago my sister confessed a new piece of the story.  I had moved out as a teenager since he only seemed interested in her when she was very young.  It felt okay leaving, knowing that she would also leave in a couple of years, and I kept in close contact with her.  But my sister recently told me that once when she was sixteen our mother made her get out of a hot shower, wrap a towel around herself and sit on John’s knee in the living room.  My mother sat nearby, smoking dope and drinking gin.  My sister says he didn’t touch her with his hands, and that she jumped up and yelled at them both when he began bouncing his knee into her wet body.  They laughed, or maybe just he laughed, I’m too enraged to hear the story again, and I have been incapable of seeing my mother or her creepy husband ever since.

Also about a year ago I became certified in Reiki, an ancient practice of directing our inherent personal reservoirs of healing energy through our hands to help others as well as ourselves.  I was not only trained how to dispense Reiki on people in front of me, but also how to send it long distance.  This was the most miserable (Soma)tic, taking notes for the poems during these healing sessions.  First I performed Reiki on myself, then sent it to my sister.  Then I sent it to our stepfather.  The first time I sent Reiki to him I had to run to the bathroom to vomit.  I didn’t want to send it.  The truth is I didn’t want him to feel better, but I did send it.

The last person I sent Reiki to is our mother.  Until my sister’s latest story I had been able to fool myself into believing that maybe our mother was so abused herself that she chose to not notice her husband’s proclivity for desiring six-year-old vagina.  Our mother I will forgive the last, she who compromised our safety to bring a little order to a pathological disorder.  My sleepless nights of anger need to stop.  Sending Reiki to those who deserve it the least heals me in turn, and I can feel the building peace in and around me with each session.

P.S.  At my “Impermanence Is The Old Permanence” lecture at PS1 MoMA I read this.  Someone from the audience was upset because they have family who pray for them, they said, “I DON’T WANT MY FAMILY PRAYING FOR ME!”  One big difference is that I’m not telling my stepfather and mother I send them Reiki, I just send it.  In other words Reiki is not a weapon, like saying “I’m praying for you.”  I’m not interested in using Reiki to make them feel small, and bad.  If I want to do that I only have to point at them and say, “YOU are a pedophile and YOU are his accomplice!”