Moldavite is a meteorite gemstone used to expand consciousness. We soaked two pebbles Erica brought back from the grounds of Auschwitz with moldavite oil to accelerate our purpose with these pebbles. Erica then had a dream of a sacred hamsa symbol tattooed on her left arm, a pomegranate in the palm of the hamsa flanked by two white doves. She found the perfect tattoo artist and got the tattoo.

After seeing the tattoo in person CA had a dream that when Erica pressed the pomegranate part of the tattoo it gave her tremendous psychic abilities.  In the dream she explained that she wanted to keep it quiet, but word got out and she received hundreds of letters a day from people asking her to contact dead relatives.  One letter was from a circus asking Erica to travel with them as part of the show.  A man asked her to speak to Hitler’s ghost.  Stacy, Kathleen and I said NO, afraid that Hitler wouldn’t leave her body after being allowed inside for the channeling.

We saw the film BATTLE ROYALE together at the IFC in NY.  We each brought a line from the film:


“There’s one cookie left.”
“Binoculars are the best weapon.”

For 7 consecutive days we each had bags containing labradorite (to release psychic interpretive grids), moss agate (to bring us closer to the natural cycles of our planet), clear quartz, and our moldavite-soaked Auschwitz pebbles.  At the end of the day we would hold the stones in our left hands.  We would press the pomegranate in the middle of the hamsa tattoo (CA drew a replica on his left arm).  We meditated quietly for a few minutes while pressing the pomegranate tattoo.  Then we would take more notes.

On the eighth day we woke, drank jasmine tea and burned sage to clear the air.  We then programed the clear quartz with the lines from BATTLE ROYALE.  We said the lines into our crystals throughout the day then placed the crystals under our pillows before going to sleep.  Next morning we placed the crystals on our foreheads for sixteen minutes then begin writing without stop for 36 minutes. 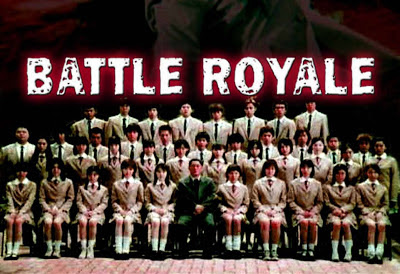 Posted by poet CAConrad at 1:24 PM