Register for online event at THIS LINK 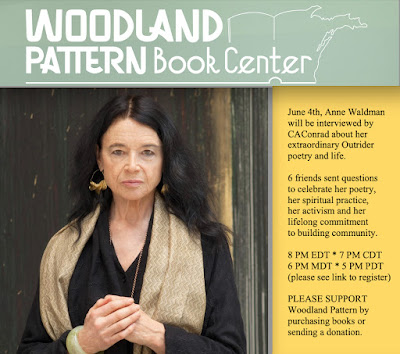 Posted by poet CAConrad at 9:05 AM 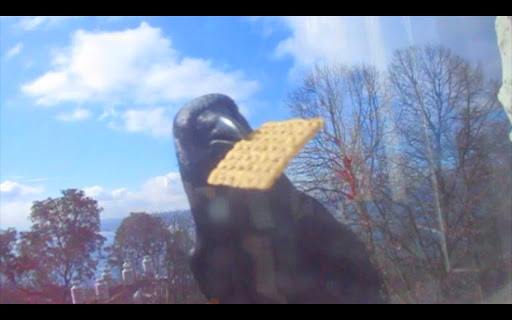 My last (Soma)tic poetry ritual, "Resurrect Extinct Vibration," used audio field recordings of animals who have become extinct in my lifetime. The ritual momentarily returned the music of the disappeared back to the air, the body, and the land.

My newest ritual has 9 different ingredients; one of them involves interspecies communication. I have been in an apartment in Seattle, Washington, during covid lockdown for nearly a year. If you have never been here, crows rule this city. They are fearless, travel in large groups, chasing eagles out into the bay, and divebombing cats who dare to show their faces. I have been feeding them and eating with them at the window of #405.

A plastic hummus container pinned to the wooden ledge has peanuts, crackers, and fruit. Poet is the name of one of the many crows who visit me each day, and they often bring me gifts. The latest is the shiny piece of round gold foil in the center, marked "12." Here is what makes me so happy about this dazzling bit of foil: I dreamed Poet was going to bring it to me! 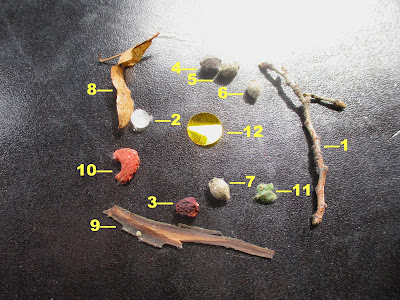 The first gift was a small twig, a part of it broken and hanging on by a thread of itself. Poet came to the window on that first day, waving the twig. Then they set it down, tapped the window with that sleek jet black beak. Then picked up the twig and waved it again. They set it down again, chose a cracker from the bowl, and flew off.

It was the night after the first gift, and my old boyfriend Christopher was in the dream, and he was yelling at me, "Stop saying crow, their name is Poet!" Christopher always thought he knew everything, but I liked his interjection on behalf of Poet. In the dream, Poet is at the window with a small piece of gold foil. Christopher said, "You better thank Poet, that is FUCKING GOLD they are giving you!"

Here we are today, all these months after the dream, and Poet brings me the GOLD! "Are we engaged now, buddy?" An emblem of the heart, feel the pulse of this golden river!

The 2nd gift was a tiny nub of translucent plastic. I wondered where Poet found this? It was for me, tap-tap, placed in the same spot where the twig had been deposited. At what point of the day did they find it, and then when did they think I would like it?

The 3rd was a dried red berry. Poet seemed to have a hard time parting with it. I said from my side of the window, "It's okay if you want to eat it." But they put it down, traded it for a peanut.

The 8th gift is a lovely, twirly tree seed. Poet was proud of this small flag. Tap-tap, then waving the flag of Maytime whose violent growth surges are weighed against its arrant grace.

The 9th was a strip of bark smelling of the sacred nourishment and fertility of the forest.

The 10th was a red half-moon piece of processed cat food. Poet struggled. They LOVE red half-moon pieces of processed cat food! "It's OKAY, Poet! I'm VEGAN! Go ahead, take it!" They set it down on the ledge in the spot where they place all of my gifts. Then tilted their head to look at it very closely, then picked it up, set it down, looked some more. Then Poet quickly tapped the glass, grabbed a cracker, and flew off! "I HAVE TO GET THE HELL OUT OF HERE RIGHT NOW BEFORE I EAT THAT DELICIOUS HALF-MOON RED CAT COOKIE!" The effort alone is something I cherish from our bartering.

The 11th was a fragile, soft, green seed pod. It was the sweetest of all the gifts, held by the absolute tip of Poet's beak! As they flew to the window, it stood out, a small green light set in front of their flight. The most petite bouquet, just for me! And how was I to know that THIS was to proceed the GOLD dream foil? If you ever meet me, ask to see the GOLD dream foil; it will always be with me. 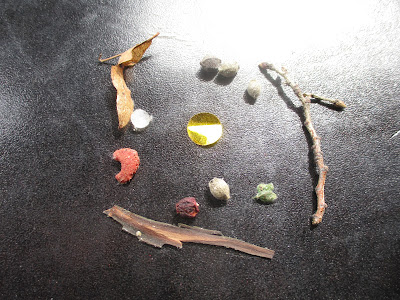 Posted by poet CAConrad at 9:11 AM

I am excited to write poems inside this new ritual!
Please click HERE for registration
Many thanks to HOME SCHOOL 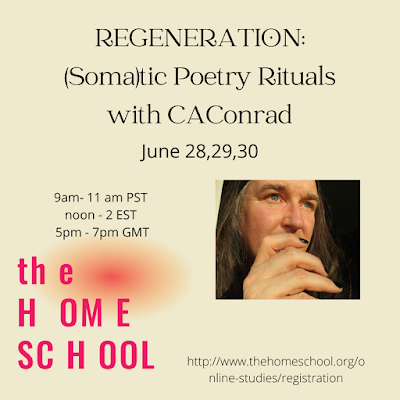 A Dream of Rome

If all goes well, I will be living in a gallery space in Rome this coming November. For years I have wanted to LIVE a very public (Soma)tic poetry ritual, and thanks to artist Jason Dodge, it is coming true!

Am I saying I will be an exhibit? I suppose so because all breathing, walking, dancing, eating, sleeping, and other forms of living will be done there. Most important to me, though, is the community of the museum. Each day and evening, there will be many ritual activities for writing poems and anyone can join me as often as they want. Cooking as ritual for writing poems, as well as building, painting, talking about death, disease, love, and the destruction of everything that wants to prevent the bridges we can make to reach one another. This community ritual is separate from Poetry Commons, but I hope to collaborate on many levels with many different people through both. 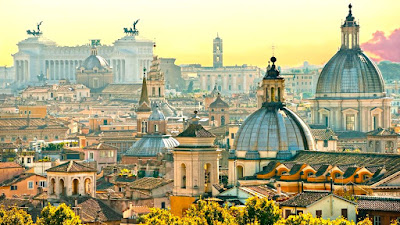 Posted by poet CAConrad at 5:00 PM

May 20, 2021, ✪✪ 1:00 PM Seattle ✪✪ 4:00 PM New York ✪✪ 9:00 PM London
This is a FREE Workshop
PLEASE REGISTER AT THIS LINK
PLEASE SEE NOTE BELOW FROM THE ORGANIZERS AT CARRIE SECRIST GALLERY
MANY THANKS TO Dannielle and Sharmistha 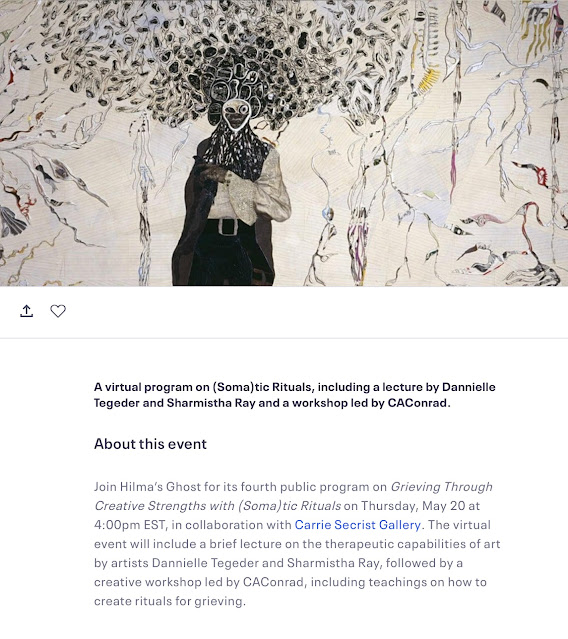 NOTE from event organizer Dannielle Tegeder:
So excited for this Thursday’s free workshop on grief, death, ritual with one of my favorite poets CA Conrad. Join us @hilmasghost for its fourth public program, “Grieving Through Creative Strengths with (Soma)tic Rituals,” Thursday May 20 at 4:00pm EST. ✪ ✪ This is a virtual event, hosted by Carrie Secrist Gallery, will include brief talks on death rituals and the therapeutic capabilities of art by myself and @sharmistharay, followed by a creative workshop led by artist, poet, and ritualist @caconrad. ✪ ✪ Bring the art materials of your choice for a 50-minute session led by Conrad. ✪ ✪ Following a year of isolation, distance, and widespread loss, burnout and grief pervade our day to day lives. This session with CA Conrad focuses on somatic rituals to connect deeply with our bodies and find presence of mind. The workshop will address death and how to make sense of loss. We will learn how to create our own rituals as a means of grieving. ✪ ✪ Tune in to help us invoke the spirit of Hilma and follow the journey of the inner landscape! ✪ ✪ [Image: Pieter Bruegel, The Triumph of Death, 1562] 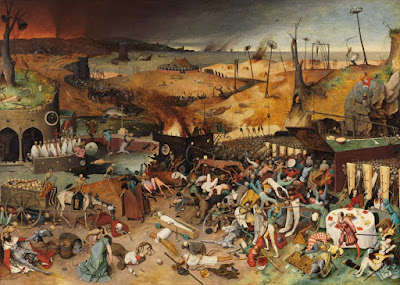