It is an honor to be published with these amazing writers!
MANY THANKS to our editor/publisher Noah Ross!

Posted by poet CAConrad at 7:17 PM

(Soma)tic Poetry Rituals are a different kind of investment in the everyday. If you hate your job, for instance, you can build a ritual to be inside this space that can reveal the unexpected and make a poem through the previously unexplored aspects of the work environment. If you have a job you dislike, that is entirely too many hours of your short life to waste. Hours you are never going to get back. For over a decade I have been building personalized rituals with people who hate their jobs and, so far there is no job where a ritual is not possible.

If you have an unpleasant job, or if there is anything boring or annoying in your life that you have to do but hate to do, please consider building a ritual inside that space. If you can get yourself to create in such an area, then you are free to create anywhere, any time. There is no place and no time where the poems are not possible. 95% of poets eventually stop writing, and I believe it is due to the stresses of our culture of work and the many forms of normalized compliance we deal with. Each new responsibility tries to shave off more of our jagged edges. I believe in your creativity and your ability to find the strength in it and to live more fully, to not be yet another person who says that they used to write poems, used to be creative. Let us always talk about creativity in the present tense in our lives.

Keep it as simple as possible at the start. The simpler the first ritual, the more likely you are going to be willing to do it every day. It could be as simple as writing for five minutes before work, five minutes in the middle of the workday in the toilet, and five minutes after work.

Once you begin writing poems inside these rituals many new ideas for writing will reveal themselves. We take many of our daily movements for granted: going to the refrigerator for instance. The possibilities of the fridge and freezer are endless. You could hold an empty drinking glass against the side of it and study the sound of its motor. Use a magnifying glass to examine the exterior and interior in ways you had never done before. Use binoculars to sit across the room to look at it very carefully while far away. Close your eyes and smell the inside. With your eyes closed feel the contents, taste them. Take notes throughout the process of a daily exploration of the refrigerator.

Allow poetry to become an integral and necessary part of your life. I have created rituals tracking the garbage I produce in a week, another involving homemade star constellations, or experiencing what the impact of hearing the word "drone" has on the human body, and many others from talking with trees, ghosts, or translating Shakespeare's sonnets with crystals. My boyfriend Earth was brutally tortured, raped and murdered, and I created a ritual to overcome my depression, while other rituals became political actions on the streets. As far as I know, there are no limits to what is possible.

One thing I like to suggest is writing in notebooks with lined paper, then completely disrespecting those lines. Write wildly, like a child, for whatever we can do to strip away the various structures built to corral our attention is vital to this particular process of note-taking where we hope to find ourselves wholly present and not troubled over lines on paper and other concerns we have been trained to obey.

Our internal editor is one we have built upon since we first learned to communicate, reaching for the milk, the shiny earring, the hovering gull, eventually acquiring the tools for constructing proper syntax, the uses of punctuation, etc. Our internal editors are invaluable for shaping our poems, but they do get in the way of these raw notes we write inside the ritual. When taking notes, as soon as the mind forms full sentences, or follows a thread of an idea, write faster. We can outrun the internal editor, to fully trust ourselves in the middle of the ritual, and to arrive at that moment where all rebuke over words and their customs falls away. It is here where we can cruise into the previously unimagined magical writing we had concealed from ourselves.

Sometimes when attempting to write ahead of our editor we get caught in mind loops, thought and language patterns that keep circling on themselves. Here are three tools for breaking out of mind loops:

1) Inhale coffee beans or grounds. This tool recalibrates the olfactory and can jolt us out of a mind loop we find ourselves caught inside while writing.

2) If the coffee does not work stare straight ahead at an immobile object, then flick the tip of your nose with your finger. Do it just hard enough that it disrupts your visual pattern.  This tool often helps release us to go back to writing.

3) If your mind loop is pernicious and not wanting to let go of you, then stand up and wildly thrash-dance, especially kicking your legs in the air as high as you can.  This tool always works.

NOTE: It is essential to do this next phase in one sitting.

Take your handwritten notes to a computer and open a writing document, Word or whatever software you use for writing. Click on the page to make sure it is ready to be used, then shut the screen light all the way off; this is to preclude our need to be watchful for typos. Position your fingers on the keys, have your feet flat, then close your eyes and type as fast as you can for five minutes, and same rules apply as with the handwritten notes: as soon as the mind forms full sentences, or follows a thread of an idea, type faster.

The blind speed-typing will expand the notes for the poem. The first bout of it unleashes whatever language we have stored in us at the moment. The second and especially the third times are after we have been rereading and transferring our handwritten notes, our memories tripped over and over with images of the experience of doing the ritual. These bouts of the blind speed-typing tend to enrich and compound the notes in ways that often hold unexpected, crucial language for the poem.

Print out two copies of this chaotic looking document. Hide one from yourself for a month. Carry the other with you wherever we go with a highlighter pen, marking favorite nuggets of writing for the poem. These pieces can then be culled by copying and pasting them into a new document to begin shaping the poem. It all starts to come together on its own at this stage, awakening the internal editor to help build the poem. The second copy you hid from yourself for a month can be taken out of hiding and read backward: the last word typed is the first word read and the first word typed is the last word read. Reading the document backward often uncovers entirely new ways into the poem we would not have seen otherwise.

Posted by poet CAConrad at 8:07 AM 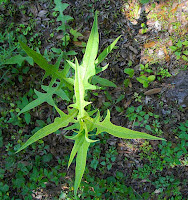 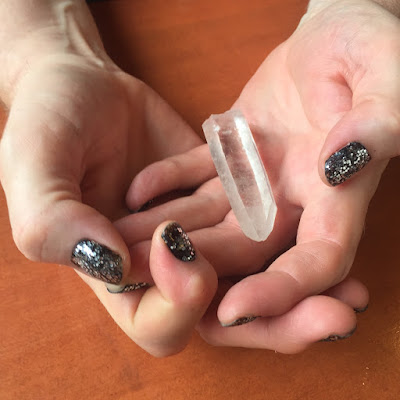