When I became vegan and macrobiotic in 1988 it was when scores of friends were dying of AIDS and I was constantly urging them to join me for the health benefits.  This is to say I did not begin being vegan for animal rights, but becoming vegan changes our bodies and cleanses our formally inconsiderate perspective on other creatures.  I remained vegan for the lives and rights of animals, but as a child, I grew up hunting deer, rabbits, pheasants, and squirrels.

Whisper was the name of my hunting dog.  After receiving my first rifle at 9 she and I loved to explore the forest and meadows together.  When I shot a squirrel she would retrieve it and hover eagerly, waiting for me to toss her the heart as I skinned and cleaned it in the running brook, then secured its little body onto sticks to hold over a fire for lunch.  I now refer to Whisper as my Lord of the Flies companion and she would be very sad if she were alive today to find that I no longer kill and eat squirrels in the forest.

I drew a rough sketch of Whisper and filled in the drawing with black ink.  Then I made a kite out of sticks and paper, gluing Whisper's silhouette on the front.  I made secret notes on another piece of paper with words she knew for hunting and running through the forest, then glued it to the back of the kite, or rather the side that takes the wind.

Sending it up, her rough portrait facing the sky above me, the wind pushing my secret messages through the kite and into her image.  Because we lived in the country she never knew the tug of a leash, so it felt odd having the pull against my wrist, but at the same time I liked it, that tension, getting to feel the weight of the wind upon her drawing.  I took notes for the poem while flying my old friend above me.

In the evening I cut her silhouette from the kite and placed it under my pillow.  The dreams were beguiling, being led into a realm of moss on tall trees, lily of the valley, and many pieces of light dancing on everything.  Whisper was not there as I knew her but somehow all around me.  It was a place where I felt myself relax in the dream.  Then I realized that I was resting in the spot where I had buried her when I was a young teenager.  I was, in fact, visiting my old friend all along in luxuriant consolation!  After waking I took more notes for the poem. 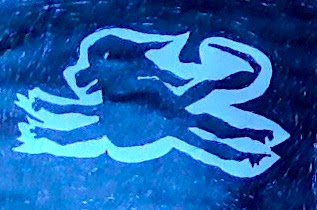 Posted by poet CAConrad at 3:41 AM

MANY THANKS to poet Caspar Eric and
to everyone who brought me to Denmark!
MANY THANKS to Line Kallmayer for
translating The Book of Frank, and to
Rasmus Graff for publishing it on OVO! 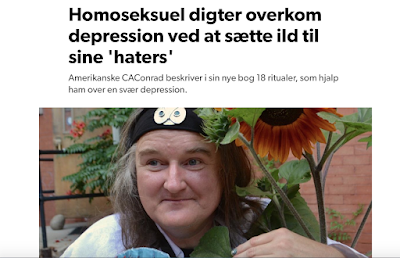 Posted by poet CAConrad at 9:23 AM 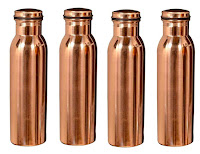 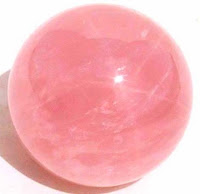 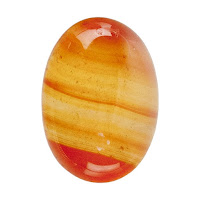 (Soma)tic Rituals IN YOUR TOWN!

Please go to THIS LINK to learn more about me visiting you and your friends in the town where you live to build Personalized (Soma)tic Rituals!