"The poem is restorative, rather than fragmenting."
--Alexandra Grilikhes

for anyone who loved someone who died of AIDS

In January gather snow, this is intimate this calling to honor the shock of being alive. I made one tiny snowman named CAConrad, and one tiny snowman named Tommy Schneider. For six months they held hands in the privacy of my freezer while I visited the streets and buildings in the Philadelphia of our Love. Snow crystals travel miles out of clouds into the light of our city. My snowman read to his snowman the letters I brought home to the freezer. It's 2010, AIDS is different in this century you didn't live to see. The used bookshop where you worked on South Street is now a clothing store. Our first kiss in the Poetry Section is a rack of blue jeans and I resist hooking my thumbs in the belt loops to pull you in -- I FEEL you everywhere today. In March an old friend was visiting and she said, "But you wrote poems for Tommy after he died." I said, "But it's sublime retracing our love in this exercise." She shook her head, "No, it's sad, it's very sad. Can't you see this beautiful day?" OF COURSE I see the beautiful day, in fact I SEE IT MORE THAN EVER, and I don't need her choreography to enter it. The point of experiencing love is to engage the greater openings. It's important to ignore the directives of others when investigating the way these doors swing on their hinges. Months of spring into summer, my snowman told your snowman the memories. One night you had asked if I was upset at something. I said, "I have no right to complain, all the men are dying in our city and I don't have AIDS!" You said, "Well I have no right to complain because 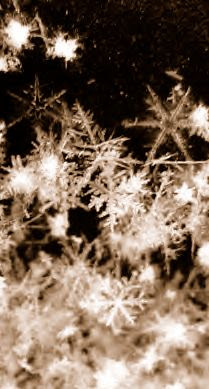 I have a wonderful boyfriend who loves me and I DO have AIDS!" Macrobiotics, herbal infusions, massages, sensory deprivation tanks, reflexology, music by Soft Cell, music by Siouxsie and the Banshees, music by The Thompson Twins, music by Patti Smith. Of course we're all dying, you'll never kiss someone who isn't dying, I know that, which is why the fear of this is not allowed to stop me from missing you the way I want. The streets were filled with men in wheelchairs that year. We were kids in love while you vanished in the funnel with them. The day after Summer Solstice I took our snowmen out of the freezer. 90 degrees, we melted quicker than expected, even sooner than I could have imagined. I burned the letters, mixed their ash with our slush. And I read to the puddle a poem that came to me years ago in a dream soon after you died: he wrote "I have AIDS / and kissed this wall" / X marked the spot / I wrote "I'm not afraid" / and kissed him back / wherever he is. I took many notes during the life of our snowmen in the freezer until they vanished. Those notes became a poem.
Posted by poet CAConrad at 12:03 AM