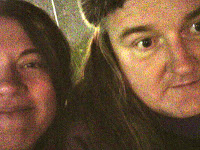 We went to Occupy Philadelphia on 10/31/11 where the tent city grows by the day for the world that is possible! The encampment is on the west side of city hall, facing the cavern of skyscrapers, forest of glass and villainy. This was late at night, between Samhain and Day of the Dead.

We were down near the subway entrance, and spent time meditating on two small gemstones we had given to one another earlier in the evening. CA’s was chrysocolla, and Debrah’s was red jasper. As soon as the meditation began a snare drum from the camp commenced, followed by another drum, then a bell, then a flute. We took notes for our poems.

We began the botanomancy by reading sprigs of rosemary and sage. One would hold and meditate on the bunch of herbs, then drop them to the ground for the other to read through their fallen patterns. These are the readings:

CAConrad: Two anarchists were making out by the strands of long wild grass, rocking back and forth to the beat of the snare drum. This is truly sacred space. Debrah threw the herbs, ALL the sage was together in the east. Two sprigs crossed over the pile, making a solid railroad tie. Tracks of the spirit world have brought her here to this day. Not just this day today, but to this day where she is the amazing poet she is. Her bio on the last page of her new book (The Ida Pingala – Blazevox Books) says she believes in near death experiences and prays to the old gods. Those are the tracks. Solidly. And they have brought her to the

pile of rosemary, bunched together in the west. Rosemary being the foundational herb for magic spells, this packed bunch of rosemary to the west is a magnificent opening to the new, all the sprigs together in the same direction, a concentrated magical force PUSHING toward some unanticipated beginning.

Debrah Morkun: CAConrad threw the herbs, and the majority of the herbs fell into one pile that beamed with light. I held my hand over the pile, to sense the herbs’ vibrations. Botanomancy is a choice endeavor, for plants have a very communicative vibration. I kept hearing the words “planning” as the vibrations of the rosemary & the sage entered my hand. I heard this word “planning” like a cacophony of multiple herbal voices. Soon, Conrad will embark on a world tour for his amazing upcoming book A Beautiful Marsupial Afternoon, & he will spend quite some time doing necessary planning & prepping for this magical tour. I noticed two rosemary sprigs that had fallen outside of the larger pile – one to the Northeast of the pile, and the other to the Southeast. I touched the rosemary sprig to the northeast first, felt the vibrations of this foundational herb tell me that this beautiful tour itself will lead him into positive magic spirals & he will remember something that he forgot a long time ago. This memory will be so large & so good that he will wonder how he ever forgot this. Next, I touched the rosemary sprig to the southwest. This sprig indicated that before CAConrad leaves for the tour, he will experience a heightened spiritual transformation that will send his entire body & spirit into the highest spiritual vibrations. This spiritual transformation will manifest itself in the most proper ways to prepare him for his tour.

For a little while we took our notes, then we each built further botanomancy ritual-meditations for the poems. These are the rituals:

CAConrad: The drums had changed to a more sustained, deep, steady beat. It felt as if they were working with us, which is part of the magic of coming to Occupy Philadelphia, or going to Occupy Wall Street. The community is a complex mixture of feeling HOME, and feeling like entering a new family, a new kind of family structure. The vibrations were ripe this night especially. At this point I asked that we fix our eyes to a lighted window in a skyscraper beyond the trees above the subway 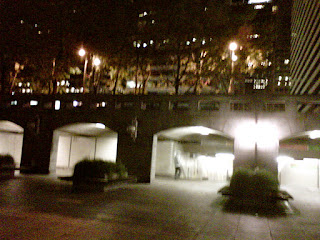 entrance. It seemed as though no leaves were moving, but in fixing the gaze on a solid, unmoveable point, the slight, hidden motions and gestures of leaves would reveal themselves. Sometimes you can only see what moves by staring into what will not. This flickering parade is then revealed at last. To the snare it shines. After a long drink of this meditation we again took time to write our notes for the poems.

Debrah Morkun: Another set of snare drums. I was reminded of Shango & CAConrad’s divinations from our previous (Soma)tic collaboration. I rode the drums for awhile, & felt pulled to a sculpture in the center of the cavernous part of underground City Hall where CAConrad & I sat. Was this a sculpture of an angel or a paper airplane, folded properly & ready for flight? Either way, the sculpture bespeaks of flight, of leaving one moment to seek another, of hope & aspiration. I said, “Conrad, we must walk around this circle & gaze into the bizarre world below.” For this sculpture sits atop an ancient Masonic magic spell of lava rocks & yom kippur, of footballs & elephant ears. An underground glimpse of flora native to Philadelphia, weeds & trees & an interesting bush with red bark. We walked around this circle & gazed below, receiving wisdom transmissions showing us that there is another piece of magic spell in Philadelphia’s magic sluice – where lava rock, non-native to Philadelphia, & nonexistent for miles & miles & miles until you reach the Pacific Northwest or Hawaii, rests creating an eruption of energy that catches flight in the wings of the angel or the paper airplane above.

Drunk from this experience, we took more notes.
Posted by poet CAConrad at 3:13 PM