--for Hoa & Owen
Having lived with a ghost for more than a decade I knew where he hovered and settled into walls and lights. This is where I aimed my scrying mirror. I sat on the floor with a handheld mirror and a large mirror behind me. The ghost is named Owen. He lived next door and killed himself where my new neighbor brushes his teeth each morning. Owen was 21; he liked books and used to work at Rizzoli’s Bookshop on Broad Street. Since his suicide he has accommodated my often-unquenchable thirst for life and my addiction and sickness for poetry!

Late at night, blocking all light from windows I read to him Hoa Nguyen’s book AS LONG AS TREES 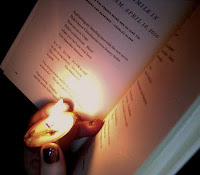 LAST. By candlelight I read a poem out loud, saying, “OWEN, THE POEM IS TITLED ‘RAGE SONNET’ AND SOUNDS LIKE THIS….” At the end of each poem I snuffed the candle to peer into the mirror behind me through the handheld mirror. I stared for a long time, dark to dark, then the candlelight again for taking notes. Then the next poem by Hoa, “OWEN, THE POEM IS TITLED ‘I’M STUCK’ AND SOUNDS LIKE THIS….”

Finally there was a face in the mirror. After a long, assiduous stare I saw my face with another behind and above. The last book Owen read when he was alive was MOBY DICK. When I told his mother she said, “That’s a children’s book isn’t it?” I said, “No ma’am, it’s not. Not at all.” Tonight I’m here, with poetry by Hoa Nguyen, being productive with a 10-year suicide, but making sense is the last thing on my mind. By candlelight the note-taking and poem reading, “I have thought for / a dirty starved circle” until the ghost and I were finished, and Hoa was finished. My (Soma)tic notes forming into a poem dedicated to Hoa and Owen. Thank you!!
Posted by poet CAConrad at 9:52 AM