Poet Kenny Goldsmith invited me to perform at the Museum of Modern Art, but instead of squandering the time and space on YET ANOTHER poetry reading I turned it into a writing performance ritual for new poems.  After calling a few talented friends to help me I went to work.  Everything was invented, including the poem that resulted, titled SLAVES OF HOPE LIVE ONLY FOR TOMORROW. I downloaded the MoMA masthead from an online press release and created a flyer to hand out in the main lobby:  A MoMA EXCLUSIVE, 12:30pm TODAY!  THE REINCARNATED SOUL OF FUTURIST PAINTER GIACOMO BALLA IN THE JOAN AND PRESTON GALLERY ON THE 6TH FLOOR!  PRONTO!  INTRODUCED BY CAConrad.

Two security guards tried to stop me from handing out the flyers.  I said, “But I work for MoMA’s Office of Paranormal Activities.”  They said, “There is NO such office!”  I said, “It’s in the basement, a little like X Files for art.”  They were much angrier than necessary and were ready to throw me to the sidewalk when Kenny intervened just in time to assure them that this was part of my performance.  I am not complaining at all by the way as the one guard was quite handsome, his beautiful flaring nostrils showing that he was ready for ACTION, ready to put me in my place!  How thrilling!

At 12:30 a large crowd gathered.  “Thank you all for coming, my name is CAConrad and I am the director of the Office of Paranormal Activity at MoMA.  I was first hired after the 2008 Wall Street collapse when many of the paintings in this particular gallery were found stacked neatly in the corner each morning.  Security camera footage shows the paintings floating across the room, most likely carried by the disturbed souls of recently departed millionaires.  After our successful exorcism I wanted to preserve the integrity and viability of my office so I found new projects for my staff.  One project was to search for the reincarnated soul of Balla whose paintings surround us today in this gallery as part of the Inventing Abstraction exhibition.  It proved to be our most challenging project

to date.  After exhausting the efforts of several psychics we asked MoMA friend and Andy Warhol Superstar Penny Arcade for help.”  I turned to Penny who waved.  “Thank you so much Penny for putting us in touch with your psychic friend in Belize who was our big breakthrough.  He told us that the reincarnated soul of Futurist painter Giacomo Balla was right here in New York City all along.  He is now a poet living in Brooklyn named Ariana Reines!  Please welcome Ariana!”

Ariana walked from the applauding crowd to join me where I asked her what she thought of her paintings from her previous life as Balla.  She said, “Oh I’m a much better poet in this life than I was a painter in that one.”  A few audience members mumbled their disapproval of the poet daring to measure her different lifetimes of art in public.  I said, “MoMA Honorary Chairman David Rockefeller was so excited when we finally found you that he and the board of trustees have graciously offered to let you take one of your paintings back home with you.  Which one would you like?”  She shrugged and said, “Well I don’t really like them, but the diamond shaped one is nice I suppose.”  I said, “Well let’s get that off the wall and wrap it up for you.”  When I walked toward the painting the handsome nostril flaring guard shook his head with a scowl.  I said, “Ariana Reines is also a healer.  Is there anyone here today who needs healing?”  The poet Stephen Boyer popped up in a BEAUTIFUL dress he made with plastic flowers from the dollar store.  Ariana had him lie on the floor below her painting she painted in 1903.  She instructed me to work with her to heal Stephen, doing a beautiful dance with her hands over his head and body, an energy work not unlike Reiki, chanting.  What a marvelous experience and I feel very fortunate to know the talented poets that I do, the kind of people who augment the spirit with their very presence.  Notes notes notes, I took notes, and the notes became a poem. 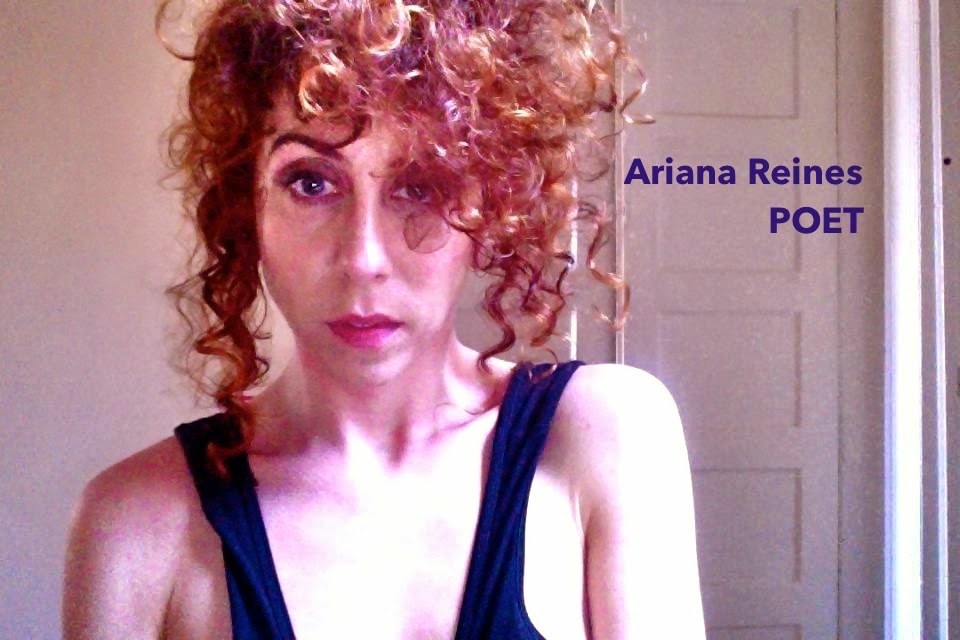 Posted by poet CAConrad at 9:47 AM