The animals of the world exist for their own reasons.  They were not made for humans any more than black people were made for whites or women for men.
--Alice Walker 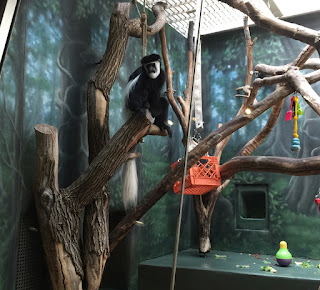 Before visiting NTU (Nanyang Technological University) in Singapore I visited monkeys at the Philadelphia Zoo (Prison).  It is very difficult to witness pitiless, unenlightened parents normalize (even CELEBRATE) the incarceration of innocent animals for their children.  In this ritual I carried a small piece of celestite in my left hand with 9 blades of grass plucked outside the zoo (prison).  Celestite’s name is derived from the Latin to mean “of the sky,” and it works on opening our top three chakras:  Throat, 3rd eye, and Crown.  It was important I chose a stone that was capable of allowing any communications to pass into it as a temporary battery and transmitter without the complications of me needing to translate the messages for myself since the messages were not for me.  It was up to the wild monkeys of Singapore to interpret our unfortunate cousins’ stories from the United States.

I clenched the crystal and grass while making eye contact with Columbian black monkeys, and white-bellied spider monkeys.  Their faces were anxious and sad.  The Columbian government was not demanding the release and return of one of their nation’s most beautiful natural gifts and they knew it.  The depression of the animals did not seem to register with parents and children pointing and laughing, eating candy and enjoying their freedom.  I did not care that they occasionally stared at me as I spoke out loud to the monkeys, telling them that I am on my way to visit our cousins in Singapore where they swing freely in the trees.  “What would you like me to tell them?”  I stared into their eyes and said, “I love you little cousins,” then left the zoo (prison), putting the crystal and grass blades in my left pocket.  I took notes for the poem before, during and after the zoo (prison) visiting hours.

When you know something is wrong in the world it must be confronted.  Be sad, be angry, be active, and never apologize, ever!  A couple years ago someone overheard me saying, “Zoos are prisons where not a single prisoner has ever seen a lawyer!”  This person said, and this is a direct quote, “But animals really are better off in zoos.  It’s safer for them.”  And so began one of the stupidest conversations of my life and no matter what I said this person was confident that imprisonment was the best choice for animals.  “It’s a dangerous world out there,” they informed me.  I tapped the side of my head and said, “It is not nearly as dangerous as the world IN HERE this evening!”  Conversations like this one is exactly why I prefer all other animals over human beings!  I LOATHE my species for the overwhelming lack of empathy for any creature other than our own!  In the mid-1990’s there was a fire in the ape house at the Philadelphia Zoo (Prison) and 23 sentient beings died that day.  It was shocking, and when the news reporter said, “Luckily no one was injured,” I called the news station to complain, “You mean NO HUMANS were injured!  How can you say 23 died but no one was injured?” 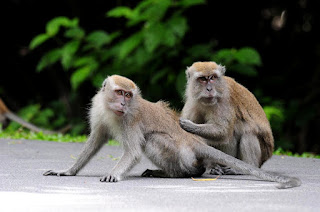 The eyes of the captive monkeys haunted me and I touched the outside of my pocket where I kept the crystal and grass.  After I arrived in Singapore I asked my friend Divya if there were any wild monkeys in the area and was excited to hear that her husband Josh had an ongoing encounter with a wild monkey on the NTU campus.  My eyes scanned the trees and lawns whenever walking.  For most of the week I kept the crystal and grass in my pocket while hoping to spot him.  The day after teaching a poetry workshop I walked from the building to find a small group of people photographing themselves with something in the background.  When I craned my neck I was excited to see two brown monkeys hugging one another near the pond.  All my life I had wanted to see monkeys who are FREE.  I sat in the grass and threw several pieces of fruit to the creatures.  One of them came over, then the other, eating delicious melon slices, their eyes and demeanor completely different from our enslaved cousins.  I placed the crystal and grass on the ground between us with a last melon slice.  When one monkey touched the crystal under the melon she LOOKED at me suddenly and ran away, agitated.  I admit feeling guilty for causing her anxiety with the message from our enslaved cousins but the other monkey hugged her and comforted her.  I took notes for the poem as they groomed each other and ran across the grass, their movements and play shaking off the humiliation and degradation of our cousins in Philadelphia. 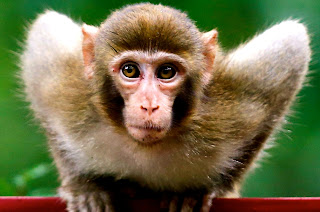 It was one of the most exciting times of my life with nonhuman creatures.  I was high with joy the rest of the day.  Then after cooking dinner I turned on Channel News Asia and sat with my bowl of rice and beans.  I went from being thrilled and high to completely shocked when a reporter stood on a busy street in Tokyo where a chimpanzee named Chacha was on a telephone poll after escaping from the zoo.  Chacha had broken out of prison!  And at first I was excited.  It felt like a message.  It was a surreal coincidence.  How could this be?  Then a man shot a tranquilizer dart into Chacha’s shoulder and the beautiful animal who had looked happy to be out in the world felt immediate and intense pain.  Chacha SCREAMED at the man, then grew limp and fell to the outstretched net awaiting below.  Humans wrapped Chaca in a blanket and put him in a van and drove him back to prison for the rest of his life on this human-dominated planet.  Why do we cage animals?  Because we can!  Because they are weaker and we do not mind exploiting this weakness and sharing our authority over them on a Sunday afternoon with our children.  It is also more efficient to gather all the animals and put them in cages in one place near our homes rather than fly all over the globe to see them. 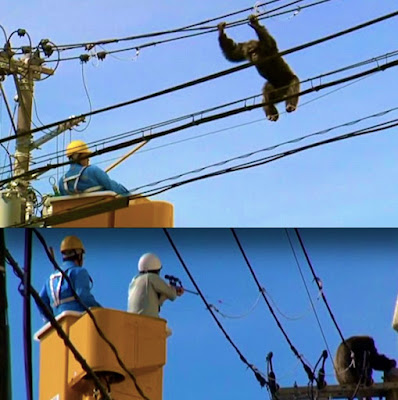 Efficiency breeds brutality every single time.  Chaca, my heart breaks for you and want to visit you one day in the Tokyo Zoo (prison) and tell you in person that I love you but have no idea how to save you.  I unexpectedly took even more notes for the poem, the darkest of the day’s notes and watched the rebroadcast later in the evening to take more notes as Chacha screamed and fell from freedom all over again.  The nightmares of my sleep that night assured me that the world is as chaotic and vicious as I imagined, and took more notes upon waking.  Waking, we need to be waking.

(P.S. It was my luck that there were two monkeys.  My crystal and the messages from the incarcerated monkeys in America caused trauma to the one and if it were not for their companion I do not know how they would have been comforted.  Because the trauma was quickly extinguished I got to enjoy my day.  This is something I will never repeat.  It is bad enough that we humans cause so much suffering on the planet and I do NOT need to be spreading it around.  Healing needs to begin and soon.  The way we mistreat animals is evidence we are far from being able to rescue our own lives at this point.  We need to start spreading compassion.  Can we begin today please?  I am asking this to myself, and passing it along.)

Posted by poet CAConrad at 5:13 AM