I claimed my life long ago. I saw from the very beginning how one exploits another in the world, and saw the most important thing was to claim my life totally.
--Louise Nevelson 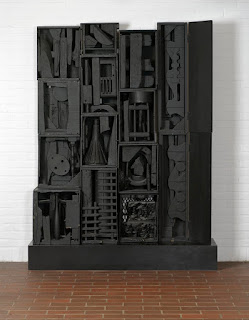 Louise Nevelson's unique sculptures have enriched my life for many years, especially the large boxes composed of many smaller interior boxes, as if we were looking at an apartment building with the outer wall stripped away, or through the wall with x-ray glasses.  My favorite way to spend time with her work is to look at the entire frame as a question, and each interior section as a different clue to the answer.  From a distance, they appear to me as skeletal remains of an ancient storyboard, bones of thought.  She has often made me see the world very differently from how I thought I knew it, and how can we ask anything else of an artist?

In Denmark at the Louisiana Museum of Modern Art, I fell in love with her sculpture in the collection titled, "Royal Tide III."  By a giant grandmother tree outside the museum, I buried a tiny clear crystal, set in the ground vertically, with the pointy end up.  I also planted crystals outside museums with her work in Philadelphia and Kansas City.

At the Pennsylvania Academy of Fine Arts in Philadelphia, her piece in their collection is titled "Cascades Perpendiculars 1," and is composed of wood painted black from the remains of New York City's St. Mark's Church organ after there had been a fire.  Her home for more than half a century was New York City, so it feels auspicious to be working with this particular piece.  At The Nelson-Atkins Museum of Art in Kansas City, Missouri is one of my favorite sculptures by her titled, "End of Day--Nightscape IV," also made of wood painted black.  I planted a crystal outside the museum in Kansas City when visiting the poet Anne Boyer.

Once I planted the crystals, the ritual could begin.  Together these three crystals became a Nevelson crystal grid creating a triangle stretching across America, and across the Atlantic.  I started on the New Moon, December 7, 2018, and ended on the New Moon, January 6, 2019. 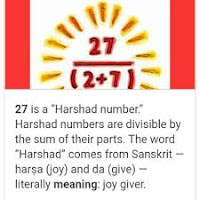 It takes 27 days for the moon to orbit Earth, making my ritual 27 days long.  The influence of the moon's 27-day cycle has embedded itself into our everyday lives for thousands of years.  27 percent of Earth's surface is land, and I have women friends who menstruate on the full moon every 27 days. It takes 27 days for a human cell to regenerate, healing through the full cycle of the moon, and there are 27 bones in the human hand.  In Sanskrit 27 is a Harshad number, which means "joy giver," and in the Kabbalah, there are 27 channels to communicate with God.  When is it a good time to mention that a man's ejaculate travels 27 miles per hour?  In this (Soma)tic poetry ritual I observed my body inside the Louise Nevelson crystal grid through the cycle of the moon.

In an interview once, Nevelson said, "I don't like the safe way, it limits you."  On the New Moon, I sharpened my boyfriend Tre's bowie knife until it could cut cleanly without snagging or tearing into flesh.  To trust someone to slice me for a poem is a risk I am always willing to take.  When I said it was for poetry I was able to convince Tre to be the one to cut me.  We did it outside under the bright dome of stars in Tallahassee, Florida.  The cut was quick and smooth along my arm, and I licked my blood and wrote notes for my poem without swallowing until the end of writing, keeping the metallic rich taste of blood pooled on my tongue.  It takes 27 days for the human cell to regenerate.  Each day of the ritual involved studying the wound with a magnifying glass as the cells increased, knitting themselves back together again. 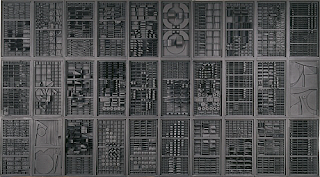 Nevelson's sculpture boxes are the full moon seen at once.  Each section within is a story of its phases: crescent, quarter, half, full, etc.  The light of the moon is not its own, as we know, so I pushed the ritual into the source of moonlight by sitting in direct sunlight each day, feeling it on my face.  In my hand I clutched another crystal to adhere myself inside the Nevelson grid.  I closed my eyes, meditating on the moon, imagining how the sunlight that was hitting my face shared time with the same light bathing the moon on the other side of our planet.  In the United States, everyone seems to notice the full moon and loves acknowledging when it is, debating whether it was full the night before or maybe it is tonight or the next night.  In the US there is a dissatisfaction with anything less than the largest possible pie, no matter what it is, but at least I know I can get people excited once a month about the moon. 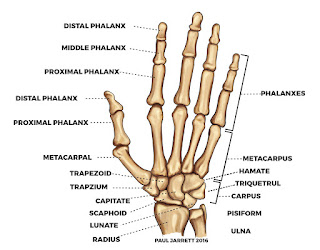 Nutrients traveling to Earth on the rays of sunlight can feed you no matter where you receive it.  You can hide in the backyard where no other humans can find you, but the Vitamin D nutrients will reach you just the same.  Standing in the middle of a crowded lunchtime city sidewalk, if you look up, face the sun with eyes closed, you will receive the same nutrients as you would have if you had been hiding alone.  There are 27 bones in the human hand.  In the sunlight I massaged my hands, honoring the work of writers, hairdressers, sculptors, bricklayers, mothers, carpenters, everyone grasping and lifting the world, and I said the names of the bones out loud:  Lunate, Capitate, Hamate, Trapezium, Scaphoid... 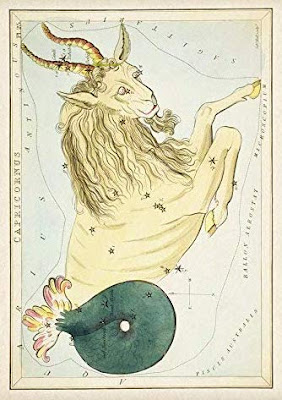 My birthday was inside the ritual, January 1st.  I became 53 years old while writing the poems, meditating on Louise Nevelson, imagining her sculpture boxes a question of Capricorn, depicted from antiquity as a bearded, horned goat with a fish torso and tail.  Astrologers often misunderstand the relationship between our fish-tails and goat upper bodies. Our goat upper-body strength and stamina are said to be for climbing and reaching the top, which makes sense, but the fish-tail is supposed to represent our weakness, an unstable downturn to the depths of water’s subconscious which many astrologers claim we try to avoid, and this is where they are entirely wrong.  The problem with interpreters of Capricorn who are not Capricorns is that they want to focus solely on positive attributes of our goat bodies and aspects, much the way we privilege the brain, the upper hemisphere of the body.  The lower half is dirty, forbidden, dark, our waistline the border between right and wrong, but I believe that is Christianized thought and that there is absolutely nothing wrong with the lower half of our bodies.  Get into bed with a Capricorn and know why the pagan gods of Europe have goat horns because we love sex and are not the least bit swayed by monotheistic dictates of "proper" sexual behavior.  The fish-tail of the goat is not dragging us down, and it is wrong to insist that this is the world of the Capricorn: torn between our two halves.  Quite the opposite in fact!  Much like the great Sphinx of Egypt, it is not that the human head needs to tame the lion body but instead needs to harness the lion, to be at one and harmonious with the muscular, wild, fierce lion body, and this is precisely the same with Capricorn.  We are learning to incorporate our deepest feelings, to harness that underwater source of potential power, to trust and allow our strong, forceful fish-tail and all it represents to drive and thrust our upper body strength to succeed.  Whenever we Capricorns prove astrologers wrong and make our two halves work together as one we are nothing short of unstoppable!  We must not allow the suspicious doubts of others to interfere with the possibilities of self-actualization, fully embracing all we have to offer our lives and the world.

I took many notes inside the Nevelson crystal grid, and those notes became two poems, "Golden In The Morning Crane Our Necks," and "You Cannot Return A Stretched Mind."

Posted by poet CAConrad at 6:39 AM