Over a period of four centuries some nine million such hideous conflagrations occurred, driving Europe’s women out of power and their tribal traditions completely underground.  Sometimes to add to the horror and drive the lessons home further, the bodies of strangled Gay men were stacked in with the kindling at the witches’ feet as ‘faggots’ of a new and horrible kind and as a sacrificial symbol turned upon the people who had valued living faggots, sacred Gay men.
--Judy Grahn, from Another Mother Tongue

Yes poetry can handle this. This is the third ritual I did to overcome my depression from my boyfriend Earth’s murder.  The third because the first two, while I liked the resulting poems, left me feeling just as depressed, sometimes worse.  The rituals for creating poems have the power to change us in ways we have yet to fully explore and I was determined to find the right ingredients for the ritual, and I did.  It worked.

Earth had moved to a rural queer community in Tennessee to work the gardens and he was happy the last time we talked on the phone, telling me about budding trees and the delicious smells of spring.  He told me about a cave he found where he liked to meditate in the mornings. We made plans for me to visit and spend the night together in the cave.  We were excited.  He told me to give Philadelphia his love. 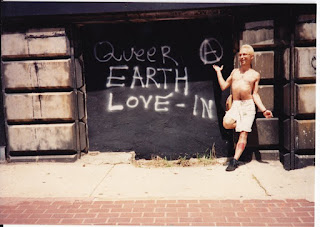 Days after that phone call he was meditating in the cave when men bound and gagged him, tortured him, raped him, covered him in gasoline and burned him alive.  The police ruled his death a suicide.  The sheriff told me to mind my own business every time I insisted Earth was murdered, and he called me Faggot like it was my name, he would say, “Do you hear me Faggot?”  Yeah, Faggot heard you.  The police knew who did it.  Or they just don’t care.  Which is worse?  My anger at the police and Earth’s rapists and killers haunted my days.  The coroner and paramedics however always called his death a homicide, which provided some comfort.

I am grateful to MacDowell Arts Colony for providing me with a little cabin in the woods for a couple of months to do this ritual in the shadow of Mount Monadnock.  It was autumn and the leaves had started to fall.  One of the ingredients of the ritual was to sit in the woods and focus on a distant tree trunk.  Being patient, staring at the tree long enough, I would suddenly see every falling leaf at once.  It can be as harrowing as it is cathartic to abruptly capture all motion with the eye, permitting the movement to synch up with an internal avalanche.  I took notes for the poems.  One night I dreamed I woke inside a tree, the wood surrounding me was a warm, fibrous silk and I could hear the sap moving inside a soft steady heartbeat.

The last time I saw Earth alive he gave me a clear quartz crystal he had carried in his pocket for over a year.  After his death I put it away.  It caused me pain with its psychic barbed wire and whenever I found it by accident my day would be ruined.  When the first two rituals failed I knew I needed a more potent ingredient.  I took Earth’s crystal with me to the residency.  This crystal had been on him everyday for over a year doing what such crystals do, receive and store information.  His breath and laughter, planting seeds in the dirt, his lips on mine, the way he tasted different in sunlight with snow, his inimitable warmth stored in the crystal’s chambers.  It was a little library of the man I loved.

Each morning I strapped Earth’s crystal to my forehead, making certain it was pressed firmly against my third eye.  Then I would swallow a smaller, round clear quartz crystal.  This was the worker-crystal whose job was to travel through my body, pulling the information out of Earth’s crystal and flood my bones, my tissue and blood, pumping his library through my heart and thoughts.  Almost immediately my body calmed, every cell dropped their heads back and sighed.  The stress of loving a man murdered without justice lifted each day of the ritual toward peace.  When I passed the small crystal into the toilet I would sterilize it and start over the next morning.  I took notes for the poems. 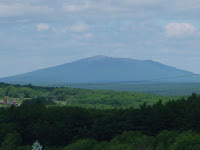 I found my joy again beneath Mount Monadnock and I am thankful.  We are time machines of water and flesh patterned for destruction if we do not release the trauma.  For years I had a movie playing in my head, my own little invention of torment, complete with a courtroom drama where Earth’s still unknown rapists and killers were on trial.  After a week of ritual the pernicious movie in my head faded and I immediately began taking better care of myself.  From 1988 to 1998 I had been macrobiotic, the healthiest and happiest decade of my life.  Earth’s murder in 1998 and the additional violence of the police cover-up shook my confidence in this world and derailed me for years.


This ritual was my Restart Button.  My love for Earth today is healthier in a world that continues to kill faggots since the days when Christianity colonized pagan Europe, burning faggots with the witches, incinerating all they had to offer the world.  “Accelerant poured on victim and set afire,” the coroner wrote on Earth’s death certificate.

The last time I saw poet Akilah Oliver before she died we were sitting at a bar after a poetry reading and I told her of the ritual I was about to do to overcome my depression of Earth’s murder (not this ritual you are reading but the first one where I liked the resulting poem but felt no better). She was encouraging and we spoke of death as a shared space with all life and this conversation led us down a dark thread about our planet’s pillaged ecosystems and in a panic I said there was no way to fix our dying planet. She touched my shoulder and said, “CA you are about to do a ritual to heal yourself and you are part of the planet so you are healing part of the planet by healing yourself.” It made us both smile and toast to healing the planet by healing ourselves. And today I hold a glass to let Akilah know that it worked finally, “It worked Akilah, poetry did this to me and I am free!”

Of the 27 poems resulting from the notes taken during the ritual, 9 were from dreams from sleeping with Earth’s crystal under my pillow.  I call the poems “Sharking of the Birdcage,” and I am very happy they showed me the way back to my strength.

Posted by poet CAConrad at 2:34 AM